Talking about a trip to Halong Bay, travellers may hear about Bai Tu Long Bay, so what is the differences between those 2 destinations? Which one should be our choice for visiting Halong

On the occasion of 10th Year Anniversary of Emeraude Cruise, we would like to offer the special promo in two weeks from 1-15 Dec 2013

Enjoy the privileges of the best packages we offer in the year!

In 1962, the Ministry of Culture and Information classified Halong Bay as a National Landscape Site, covering an area of 1,553 km2 with 1,969 islands. Halong Bay has been recognized twice by UNESCO as a World Heritage Area for its universal values of landscape, geology and geomorphology, respectively in 1994 and 2000, an area of 434 sq. km. including 775 islands. 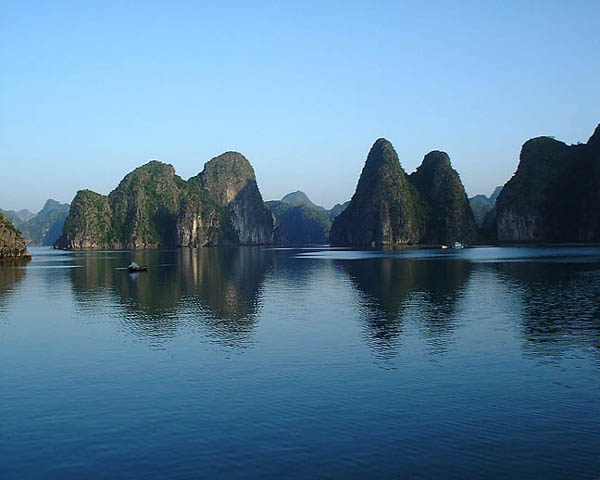 The dense cluster of 1,969 limestone monolithic islands within the bay is topped with thick jungle vegetation, which rise spectacularly from the ocean.

There are two bigger islands, Tuan Chau and Cat Ba, that have permanent inhabitants. Both of them have tourist

facilities, including hotels and beaches. There are a number of wonderful beaches on the smaller islands. The others are Bai Chay, Ti Top, Minh Chau, Quan Lan and so forth.

Viewed from above, Ha Long Bay looks like an extremely vivid huge drawing, and sailing beneath the bay is like leisuring in between a huge valey on water. Ha Long bay is exactly a wonderfully skillful masterpiece of Nature that turns thousands of dumb soulless stone islands into fantastic sculptural and artistic works of various graceful shapes, both familiar and strange to human beings.

Thousands of islands emerging in the fanciful waves look strong and magnificent but also mild and vivid. Amidst these islands tourists may feel as if they were astrayed in a petrified legendary world. The names given to the islands were based on their shapes and forms, such as, Human head Island, Sail Island, Fighting cocks islands…

Inside the stone islands are various breath-taking caves like Thien Cung, Dau Go, Sung Sot, and others. These are really magnificent palace of many huge stalactites hanging poised in mid air and stalagmites growing majestically upwards. Ha Long’s sea is always the same, blue, smooth and still. 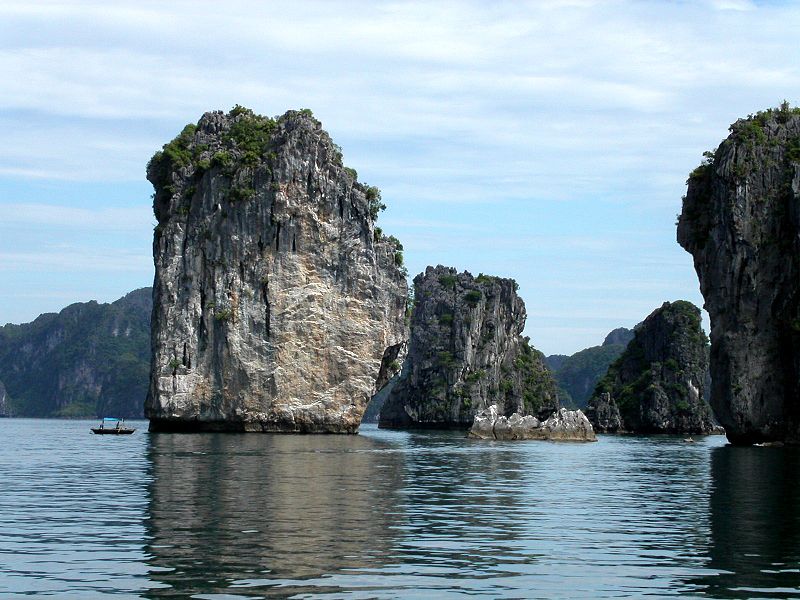 What is more, the bay has its own seasoned beauty. In spring, buds of trees burst on limestone islands. In summer, it is cool and clean with many sparkling sun rays reflecting from the sea’s surface. In autumn, especially at night, moonlight illuminates the mountains, making them like gold, inlaid into the earth. In winter, with pervasive frost, Ha Long is glamorous as “a floating flower basket on smooth wave” (by writer Nguyen Tuan). All of them, stone, water and sky, make the Aesthetic value of Ha Long Bay.

The Bay’s Geological value is evaluated in two ways: by the history of its formation and its karts geomorphology. It is also home to the ancient Viet people beginning from 7,000 to 18,000 years ago, Ha Long’s Cultural − Historical value. Besides, Bio-diversity is an important natural resource, to be well-conserved so as to maintain the ecological balance of the whole region.

Ha Long Bay is undoubtedly not only a national but also a world nature, a magnificent work of Natural Creator. People who are admirers of natural beauty should stand up, pack their luggages, and right away pick up a flight to Ha Long, or else they will soon feel regretful!

Halong Bay is located in the Northeast of Vietnam, belonging to Ha Long city, Quang Ninh Province, in the Gulf of

Tonkin. On the world map, it has borders to China in the North and adjacent to the East Sea in the East.

The Bay has a medium size of 1,553 square kilometers. It is accommodation of many fishing communities, including the 4 communes of Cua Van, Cong Tau, Vong Vieng and Ba Hang with a population of more than 1,600 people. The residents live on floating houses and boats, making their own lives by fishing and aquaculture.

The bay is a sea islands in tropical wet with 2 seasons: hot and moist summer, dry and cold winter. Average temperature is from 15°C- 25°C. Annual rainfall is between 2,000mm and 2,200mm. Halong Bay has the typical diurnal tide system (tide amplitude ranges from 3.5-4m). The salinity is from 31 to 34.5MT in dry season and lower in rainy season.

Literally, “Ha Long” means "Bay of Descending Dragons." Before the 19th century, this name was not recorded in any document or archive. In this term, there is a mysteriously legendary tale as follows

“Long ago, in the first founding days, the Viet people were attacked by foreign aggressors. The Jade Emperor sent the Mother Dragon and her band of Child Dragons to help the Viet people fight the invaders.

While the enemy vessels were launching massive attacks against the mainland, the dragons descended in flocks from the sky. They spat out innumerable pearls which changed into jade stone islands the moment they touched the water.

These islands linked together to form firm citadels that checked the enemy’s advance and smashed their vessels to pieces. After the invaders were driven out, Mother Dragon and her Child Dragons did not return to Heaven but stayed on earth, right at the place where the battle occurred.

The spot where the Mother Dragon landed was Ha Long, and where the Child Dragons came down was Bai Tu Long. The place where their tails violently wagged was called Long Vi, the today’s Tra Co Peninsula with its soft sandy beach stretching a series of kilometers.”